More details of this farm is coming soon!
How to:
Follow the recommended priority of events. This farm is only this profitable when Verdant Brink has the map bonus reward as Shiny Baubles. Otherwise, you can imagine the gold per hour will drop a bit. For this farm, I start around the time a fresh map would start. There are 5 Outposts in the map and each one of their first events are done fairly quickly. At the start, I try to make the squad hit all 5, though sometimes we only get 3 or 4 of them. From there, I go as the following (in some fashion):

- Pale Reaver Rally: Events until defence event at the top of the ledge (snipers)
- Noble Crash Site: All
- Check/finish Pale Reaver Rally
- Pact Encampment: All
- Jaka Itzel: All
- The Ordnance Corps: All

Sometimes, we may not have enough time to finish all outpost events and that's okay. I like to do this order because most of these events are pretty quick and can spawn champions, at least the first few on the list. There are events that spawn after finishing Pale Reaver Rally and Noble Crash Site which are simple veterans. While it's not that squad friendly to farm them, they are an extra bonus to Shiny Baubles if we run into them. They spawn very very frequently, but die too quickly for a squad.

Jaka Itzel and Ordnance Corps are last because their event chain can take a long time to build up. Also, some events don't spawn a lot of mobs.

Stonehead Farm (Baubles)
This is one of the easiest farms out there, but it does require at least a small squad for the beginning parts of it. To start off with, when Verdant Brink hits day time, complete the Pale Reaver Outpost events. 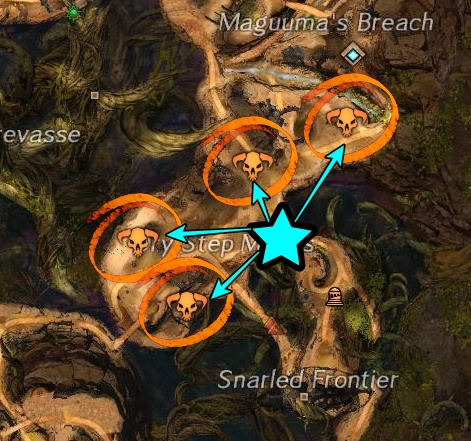