Follow the recommended priority of events. Ideally, the events should be in order to get the most amount of gold, but sometimes that's not the case. Follow the list as close as possible to get most of your time's worth. Use your best judgement to which event should be done next. Also, consider the distance between the current event and the next event and jduge if it's worth the time to travel or not. 

If you're the commander, make sure to communicate with the squad on where you're going to and have a relatively steady pace so most can still follow easily. 

Meta respawns around every 45 minutes from the previous meta (successful or not).

There are multiple portals throughout the southern maps to quickly teleport straight to the meta. This is great if your squad is in a middle of a bounty train and are super far from the nearest waypoint.

If you have bought the full tiers of the Karmic Retribution / Empowerment, prepare to get lots of karma/experience!

The first event has players attack waves of Inquests for 7 minute in this enclosed area. Waves spawn when every single mob from a wave gets defeated. It is possible for multiple waves to spawn at once.

Waves spawns from the left, right, and inside the defense zone.

The best way is to make sure you have AoEs, some range, or speed to constantly run to each wave to tag mobs. I do not recommend major/raid DPS on the mobs as they are not ranked any speciality (just normal, not veterans or elites).

For the next event, there are 6 possible bosses. Though, only 2 will be released to fight. First, you will fight 2 of them, one by one. Then, the last event has players attack both at once.

When the meta bar says "The skies grow darker", then event #1 will show up scattered throughout the northern island. Simple event where you kill veterans.

After that, 3 events (event #2) spawn simultaneously. I generally prefer to start from the left event #2 and progress to the right. It can work the other way as well, just don't start in the middle because it's just awkward flow. The event will spin you counter-clockwise, but the vortex does not hurt. There are always 3 champion elementals. They can do melee damage and sometimes reflect projectiles.

After event #2, it generally takes about a minute of NPC talk to start event #3. I generally take my time to gather until the event begins. Make sure to let the squad know ahead of time so everyone can be at the event to upscale it.

There are 6 waves of enemies for event #3. This event scales DRAMATICALLY with champions (yay). At the last wave, the champion earth Elemental does not drop loot.

As the escort ends, this cave will open. Stand on the left side (from where you enter the cave) because end-chest bug and keep your character locked inside the chest.

This boss is a Djinn so that means that when you break their CC-bar, the defense drops dramatically. Start with the bunny and use the bunny when you see the break-bar show up. It takes a few seconds until it does, otherwise you might get baited.

After the meta, there will be at least 10+ Sunken Chests throughout the shore of the island. The map above is the possible locations, but not all of the dots indicate a guaranteed chest. It's going to be a select few out of those locations.

Each Sunken Chest gives a few pieces of Unidentified Gear, Volatile Magic, and a chance for a Difluorite Crystal.

Note: Some bounties may not spawn and instead will spawn an "Ambush" event. This event is purely Awakened mobs and a single champion and does not count for achievements.

Disclaimer:
In order to receive materials such as variental herbs and quality meats, you need to have completed at least the Charr and Sylvari portion of the Gourmet Training achievement. These materials play a significant role in benchmarks that includes them. Skimmer mastery to dive underwater is also required.

Route:
Start at Atholma Waypoint [&BEMLAAA=]. Northeast of the waypoint has a quick plant farm. Most of the plants are not worth much, but can bring a lot of Volatile Magic with Volatile tools. The entire zone (except in areas with Inquest) are filled with nodes, including the water. A high amount of profits will be from:
- Difluorite (before it caps)
- Coral
- Mussels (rare chance to get a Freshwater Pearl, but the node is abundant here) 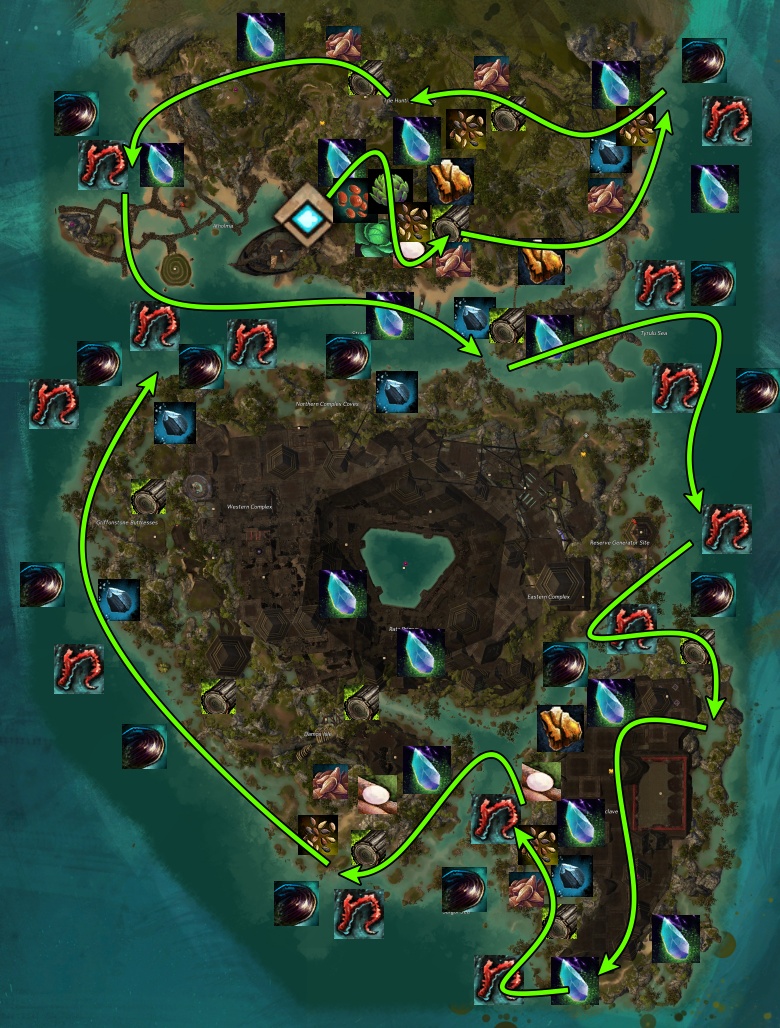 This farm consist of killing Inquests with a high power DPS build with high mobility. I personally switch from Power Necro and Power Soulbeast, but there are many others. This run does include the Sandswept South meta (the first event). There's a portal that spawns at the location of the farm to be easily teleported. By using the timer page, you can predict when the next run will be.

This farm consist of killing Karkas and Drakes with a high power DPS build with high mobility. I personally switch from Power Necro and Power Soulbeast, but there are many others. I try not attack any mobs in the water as they are too spread apart.